Together 23 years, FirstAVenue was an extraordinary trio that redefines chamber music performance from 1982-2005, by combining conventional instruments with live, interactive electronics, computers, video graphics and improvisation. The result: original, entertaining and provocative music and hyper-media events.

Forged in the artistic hot-bed of New York City's East Village, FirstAVenue presented an annual series of concerts and collaborations with dancers, poets, painters, actors, and other international performers in venues ranging from Carnegie Hall to the Knitting Factory. From 1993-97 they were Ensemble-in-Residence at Princeton University and from 2000-2005 at New York University.

After nearly two decades of outstanding performances in the New York region, this trio of multi-talented musicians offered their inventive and colorfully hi-tech programs to communities, schools, universities and performance spaces throughout the US.

FirstAVenue has been recognized for its bold artistic vision with awards from the National Endowment for the Arts, New York State Council on the Arts, Meet the Composer and the Mary Flagler Cary Charitable Trust. First Avenue has been featured on both National Public Radio's, (NPR), New Sounds with John Schaefer and New Sounds New York. Their recordings are available on the Newport Classics and O.O. Discs labels.

"They find both solace and adventure floating in the unforeseen." - The New York Times

"That the classical avant-garde has its own improvisation tradition is nowhere better illustrated then by the FirstAVenue Ensemble." - The Village Voice

"Musical haiku of the highest order, evocative and surprisingly sensual." - The New Review of Records

"The police should be able to burst in and haul away anyone caught doing it." - The Village Voice

Matt Sullivan now the Director of Double Reed at NYU Steinhardt, had, at this time, already performed internationally and was holding faculty/teaching positions at S.U.N.Y.- C.W. Post, the European Mozart Academy (Warsaw), Rutgers University, the Manhattan School of Music Prep Division and Princeton University, where he has also has served as Visiting Associate Professor. His innovative recital and solo appearances range from Broadway and Carnegie Hall to the Knitting Factory. He has recorded for Columbia, RCA, Virgin Atlantic, CRI, New World, Opus One, XLNT, O.O. Discs record labels. In 1999 Mr. Sullivan's 50th Birthday Concert was broadcast live on WNYC in New York City and then went national on NPR, National Public Radio.  Matt Sullivan is a performing Artist for Buffet Crampon and as such, plays exclusively on a Buffet Greenline oboe.

As a composer, C. Bryan Rulon has received numerous awards including Guggenheim and NEA fellowships and commissions from Chamber Music America, the Fromm Foundation and NYSCA as well as many world class ensembles and performers. As a keyboardist and specialist in live synthesizer performance, Mr. Rulon has performed at the Kennedy Center, Carnegie Hall, Merkin Hall, the Kitchen, the Knitting Factory and Roulette among other venues. He is completing a PhD from Princeton University and has taught there, as well as, The New School in NYC and Indiana University. His music is available on the CBS, CRI, Centaur, O.O.Discs and Princeton Labels.

William Kannar has performed as principal bassist with many symphonic and chamber orchestras in the New York area as well as Europe. He has premiered numerous works in chamber ensembles and as a soloist. Mr. Kannar is also a programmer of computer music and visual software. As a partner in Hologramophone Research, he has developed Chantz, software that chants text files, and co-developed Pixound, the patented technology for interpreting visual art into music. His MIDI improvisation software, Cybermusic, as well as his audio/visual software is frequently seen at First Avenue concerts. 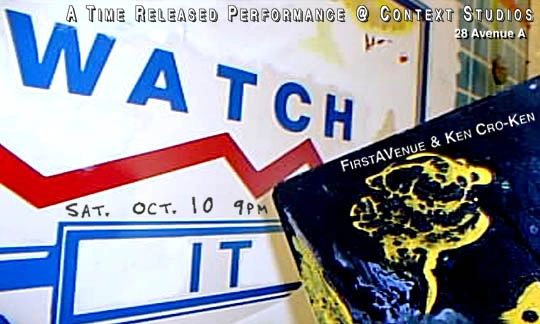 WATCH IT!
"A TIME RELEASED PERFORMANCE".
SETTING: MUSIC, PAINT AND TIME INTO MOTION